I finally tracked her down in the Inupiat town of Kotzebue, a village of about 3,000 people, north of the Arctic Circle on the Alaska coast. In Kotzebue, everyone knows each other and most are related somehow, so, following other’s cues, I hopped in one of the few taxis (that traversed even fewer roads) and said, “Take me to Della’s house.” When I arrived the small house was full – people were watching TV, playing cards, cooking a meal. When I asked for Della they said she was visiting someone else, and invited me to stay and wait. 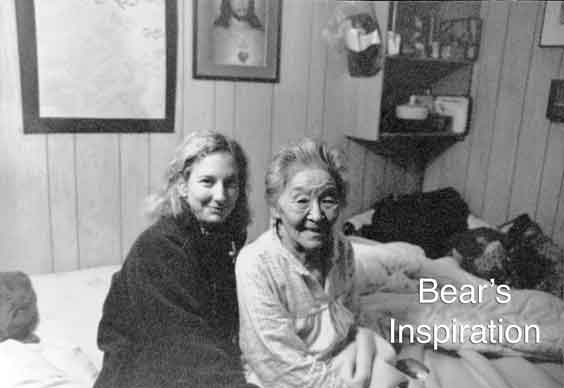 Two hours later Della arrived, and as she chain-smoked we drank coffee together and talked about many things. She was friendly, open, and eager to share her wisdom. Over the next few years she took me under her wing, showing me healing techniques and describing healing work she had done in the past. Some were cures for commonplace ailments, others more miraculous, like the story of her 40 year old son, whom she miscarried at 3 months and managed to keep alive in a tent camp on the Noatak River in the winter. She had put the fetus in a cardboard box, hung it from the roof of the tent (which was the warmest place) and fed him some type of animal butter. She described turning him every 3 hours or he would “flatten out.” Later in her life she delivered countless babies, and was glad when the new hospital took over that chore. Yet women still came to her because she could move a breech baby easily, and unravel a cord wrapped around a baby’s neck by massaging it in utero.

So many amazing healing stories.  However, she told me it was difficult to find someone to train; by the time young women became interested in her work they were too busy with their families. Meanwhile, she was showing me how to do things, but I never realized she was talking to me about carrying on her work. After all, I was a filmmaker, and ambitious as well. So I decided to make a film about her and her work.

The film project never really got started, because shortly after our first film session I got a call from Alaska saying she was near death. She had lung cancer. I came immediately, and it was clear she was very sick. I didn’t think anything of it at the time, but I could see the cancer in her energy field (I always assumed others also saw what I did.)

Over the next few weeks I witnessed a constant stream of visitors from the outlying villages paying their respects and final homage to a woman who had touched all their lives. The house was packed during the day, and every nite the floor was covered with sleeping bodies. When I arrived Della had announced to everyone that I would sleep next to her in her bed – quite an honor!

Della had always worked well with the growing Western medical establishment in the area. In fact she was quite interested in all things related to health, no matter the source.  She repeatedly told me to “learn everything from anyone you can,” and described any inexplicable healing she did as “God’s work.” Yet when she was near death she talked more freely about what she saw and understood. She surprised everyone by predicting a distant visitor’s arrival when no other communication alerted us. It was an amazing time, and when I left I told her I would return the next month, and that she was sure to recover. She promised she would take me to her village the next time we saw each other. In truth, I was in denial that I was losing her - I wouldn’t ever see her alive again. It’s what I needed to tell myself, and what prevented me from truly saying goodbye as I left.

Back in San Francisco a few weeks later, I woke one day and knew that she had died. I got the call that afternoon. A few days later, during her memorial service in her village, I sat meditating 2,500 miles away. What I experienced next was truly amazing.

I was floating above the service, with Della at my side. One by one she pointed out people and told me who they were, and their stories. Ah, I thought – she is taking me to her village after all, just as she said she would! As she turned to me to leave, I felt her energy hands slip into mine - my physical hands, in my lap in California. I was confused, perplexed. It was a powerful experience, but what did it mean?

It still took me several years to realize my path, my potential as a healer. I had some more training, and now I have found a way to easily teach others to perform healing that defies our “logical” mindset. Though I don’t use any of the specific techniques Della taught me, she was the impetus and inspiration for my practice and life’s work. Through her guidance I have come to live in a world full of wonder and mystery, a life where miracles happen everyday, a life where you can give and receive so many gifts – even a pair of hands.